These incredibly delicious Smoky Bacon HASSELBACK POTATOES with Cream Sauce can be served as an appetizer or entertaining side dish. Actually, I’ve even made these as a main dish and it totally pleased a crowd, you’ll see why….. 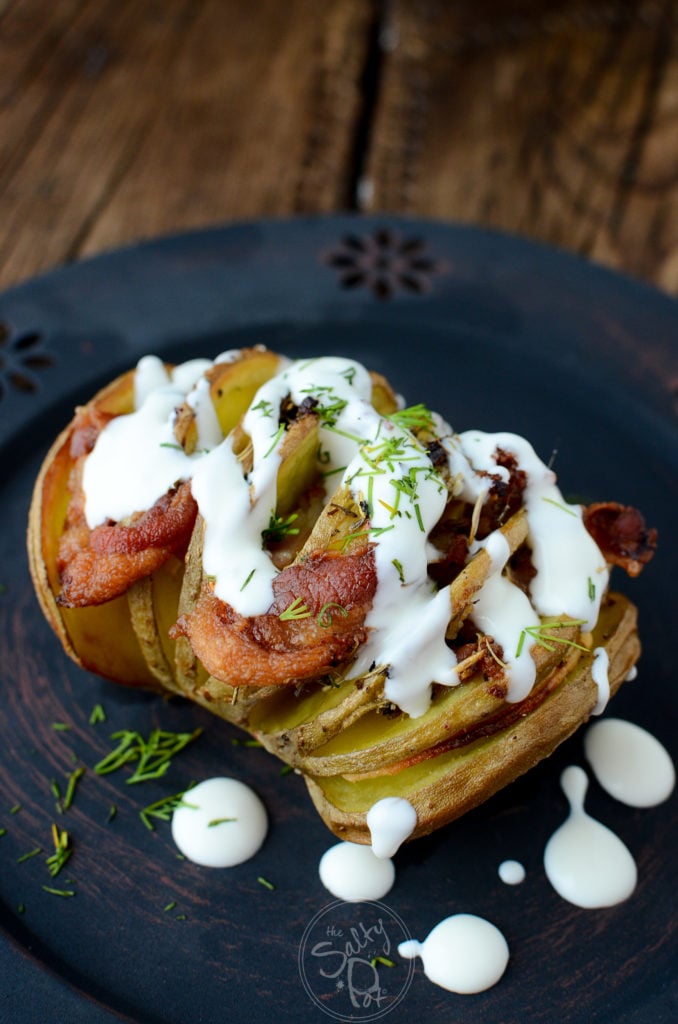 Aaaaah… the lowly potato. Just so plain and unassuming, we really need it give a break already. Probably the “wallflower” of the grocery store, all the fancier main dishes want to pair up with a “prettier” vegetable,.. or maybe a veggie that’s “healthier” with the smoother skin, or no crazy “eyes” or something, right?  Well!! Let’s all remember those broke days back in college…. Or the early days of wedded bliss when your paycheck paid for your rent, and not much else? Potatoes were your friend then, remember?

MANY meals were comprised of potatoes and not much else. They kept us alive and we should celebrate them! Their versatility is unfounded in any other vegetable, and it’s just downright amazing when you think about it. In fact, if there’s not a national potato day to celebrate, there should be!  So many types; starchy, buttery, gold, red, brown and even purple – They’re like little ambassadors of a perfect society, when you think about it.  So many differences and yet so much the same, they get along so well when mixed together and spread with a little bit o’ butter! 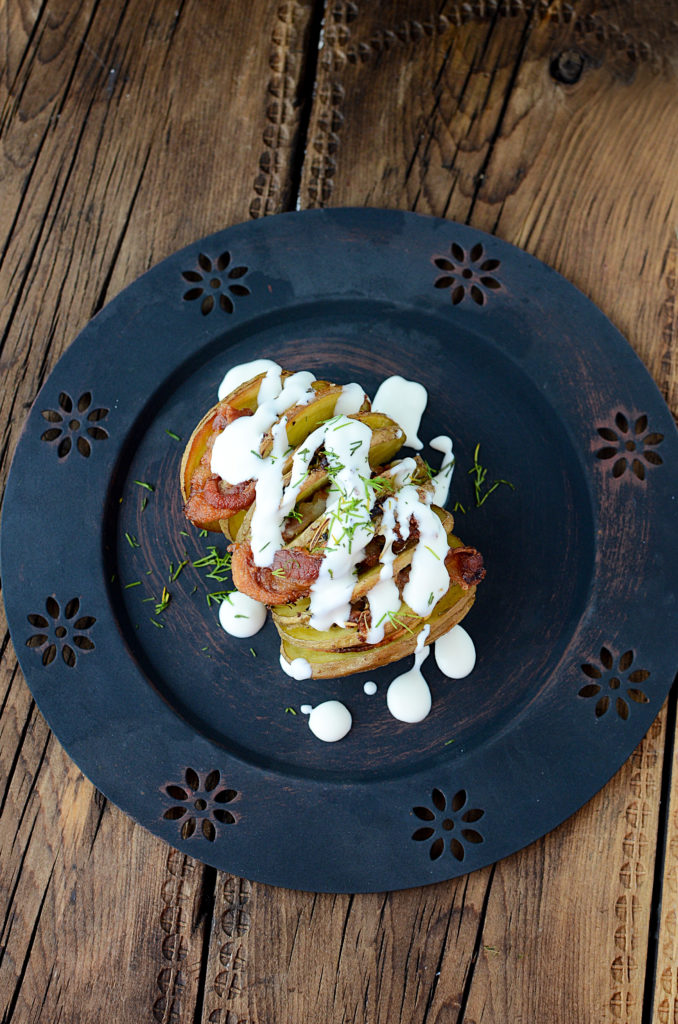 Seriously though, the list of ways a potato can be served is exhausting! Everything from a fry and a tot, to mashed garlicky and buttery bliss, dressed with a glorious gown of rich brown gravy, stuffed once, stuffed twice, scalloped, hashed and fried, baked, boiled and roasted. The potato even rubs elbows on “hoity-toity” plates, being crowned princess or duchess, and let’s not forget the French “Dauphinoise” preparation. This brings me to today’s potato: THE HASSELBACK POTATO. Isn’t it glorious??

Hasselback potatoes aren’t a type of potato, they’re a way of preparation. They sort of remind me of a cowboy potato and I honestly can’t tell you why. But amazing in taste, I CAN testify to! Sliced in that way, stuffed with all things yummy, crispy and yet meltingly soft….. Sigh. What more can you want.  When I put together a few of my favorite things, – out came the Smoky Bacon HASSELBACK POTATOES with Cream Sauce, and I never looked back.  The beauty of a Hasselback potato is that even at its plainest state, simply served with a bit of butter and seasoning, it’s still amazing in its own right. HOWEVER, that being said, add a boatload of stuffings and you have something that you could literally write about. … and well, yes, I am. It’s THAT good. Once the initial prep work is done, the variations are limited only to your taste buds. Different types of cheese, seasonings, sour cream, crème fraiche, or even a tangy yogurt would be amazing. You could add bacon bits, speck, prosciutto, and even seasoned ground beef if you wanted! Hey, be crazy and stuff the layers with scrambled eggs and bacon with ketchup or Siracha sauce! Stop me before I lose control here!

Today’s hasselback prep is simply creamy sour cream, a touch or two of onion, and salty, crisp bacon. With seasoning of course – I mean, come on, potatoes are best friends with seasoning. ANY sort of seasoning. It doesn’t care. It doesn’t judge. It likes it all!

I know you want to make these divine Smoky Bacon HASSELBACK POTATOES with Cream Sauce, but I’ll warn you! Make them once, and you’ll keep making them over and over, trust me.

Take your washed and dried potato. Longer is better here, as the more slices there are, the better it is. 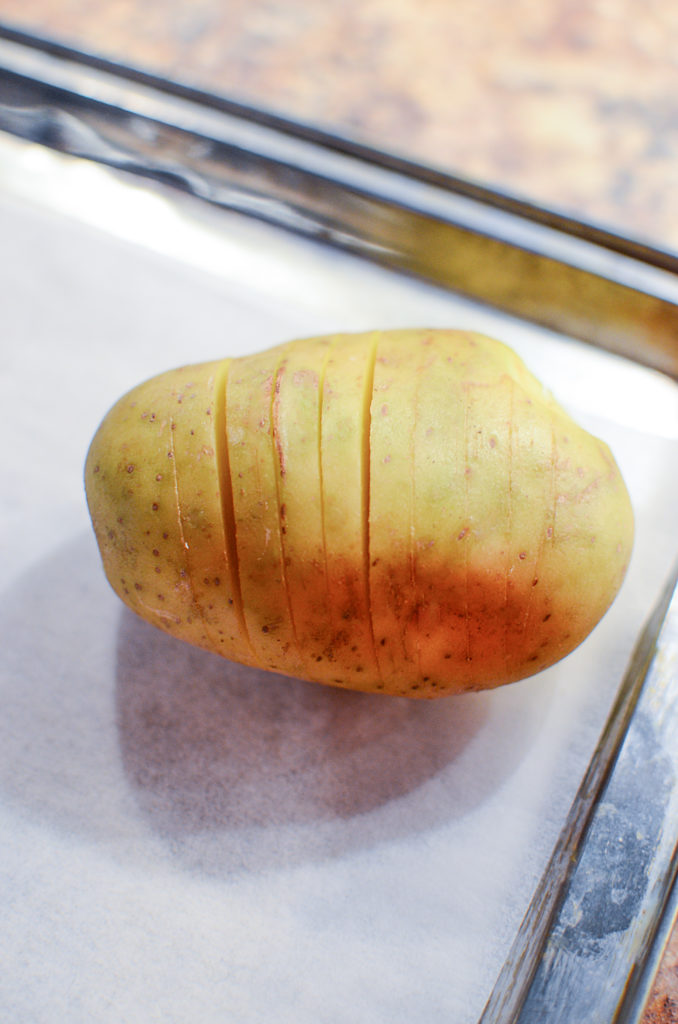 With a clean, sharp knife, make 1/8” cuts all the way down the length of the potato, never going over ¾ of the way deep into it. The whole point of this is to cut it so it looks like an accordion … make sure it’s not sliced all the way through or it’s not a Hasselback anymore. 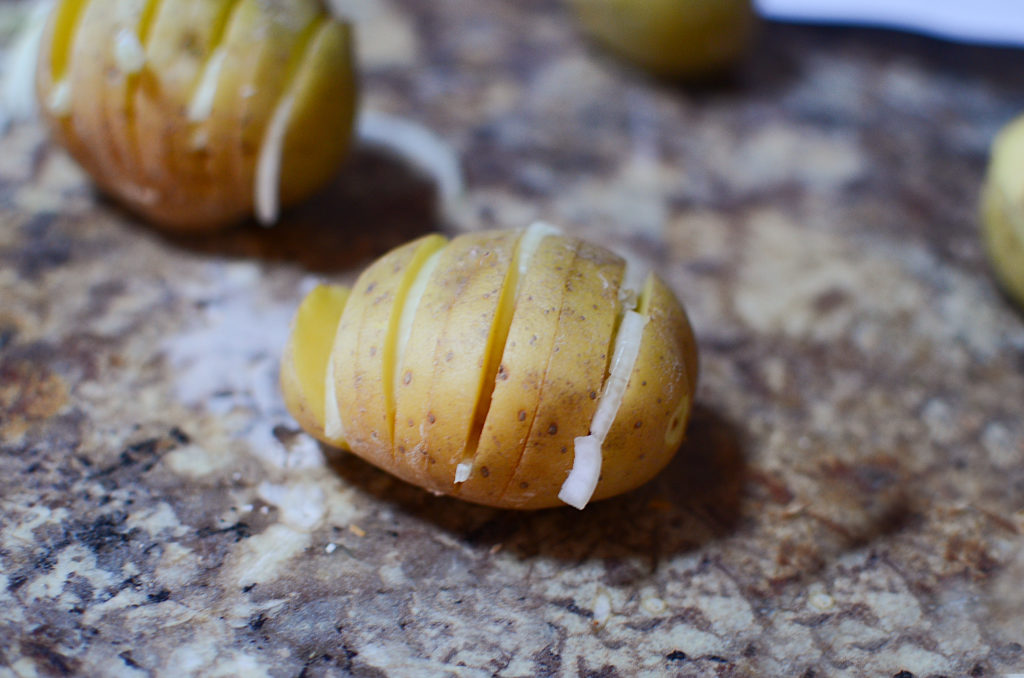 Gingerly, spread each slice apart and season with salt, pepper and a bit of garlic powder. Repeat for each separation. When complete, then go through and stuff each second or third slice with some bacon pieces and sliced onion. Ooohh my mouth is watering just thinking about it! 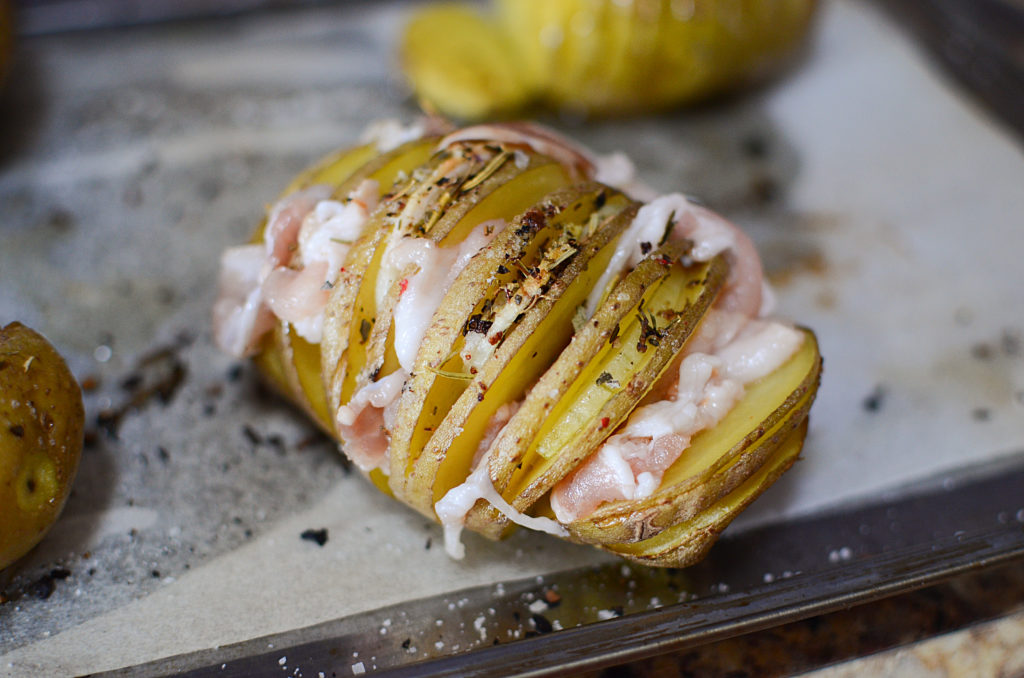 Put them on a parchment lined baking tray and drizzle the olive oil over them. Again, sprinkle with salt, pepper, and dried rosemary over the top.

Pop them in oven and bake for approximately 30 minutes or until the bacon and onions are crispy, and the potato slices have separated a bit and taken on a crispy look. You can poke them slightly with a fork and if it goes in smoothly, they’re ready for your belly! 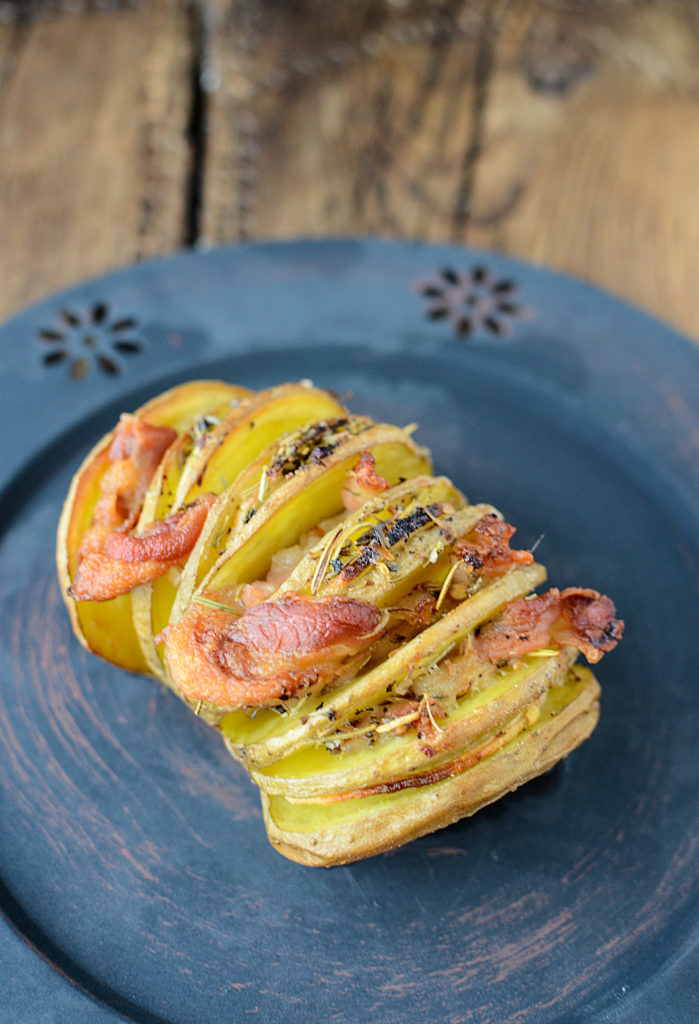 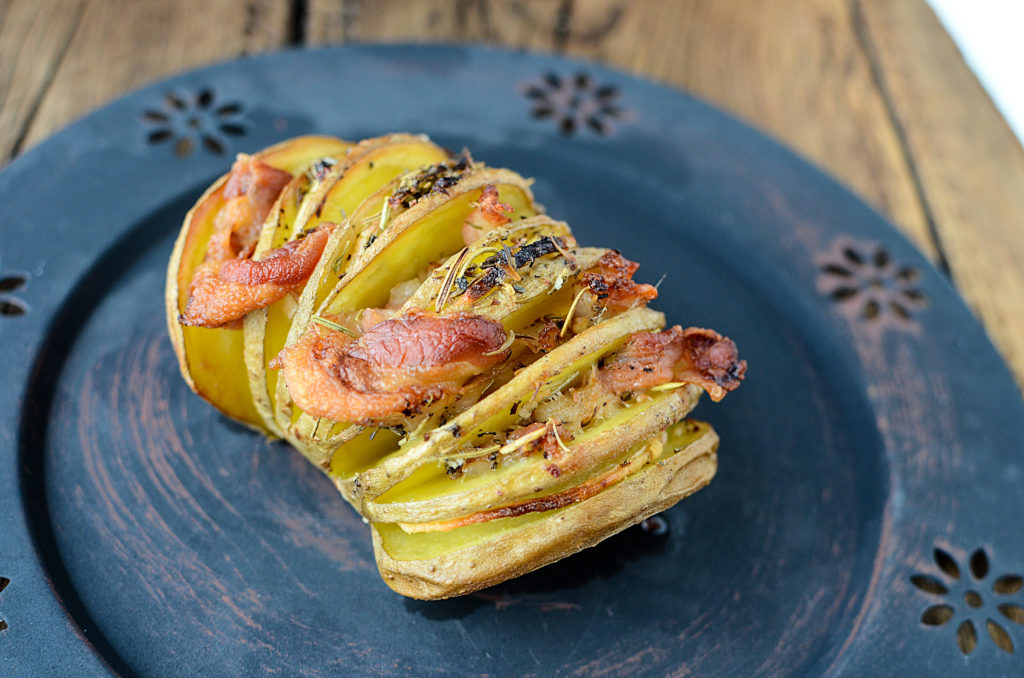 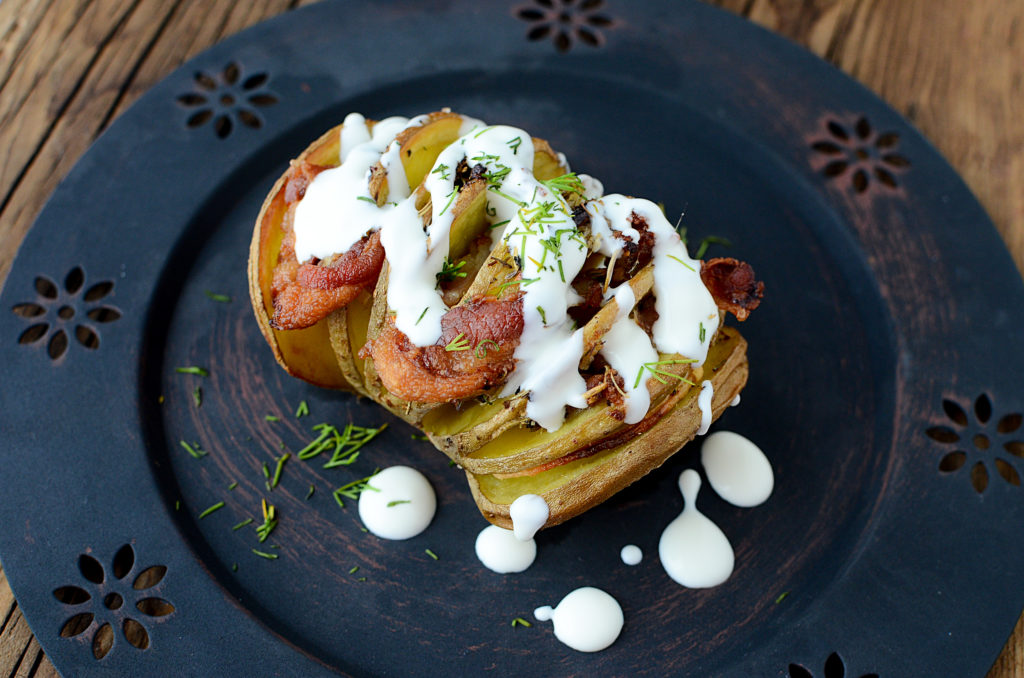 Smokey Bacon HASSELBACK POTATOES with Cream Sauce are such a cool way to celebrate the glorious potato. It may not be the prettiest veggie at the party, but damn it, its qualities make it worthy to totally write home about.

While you’re here, check out these other mouthwatering recipes I think you’ll like…. 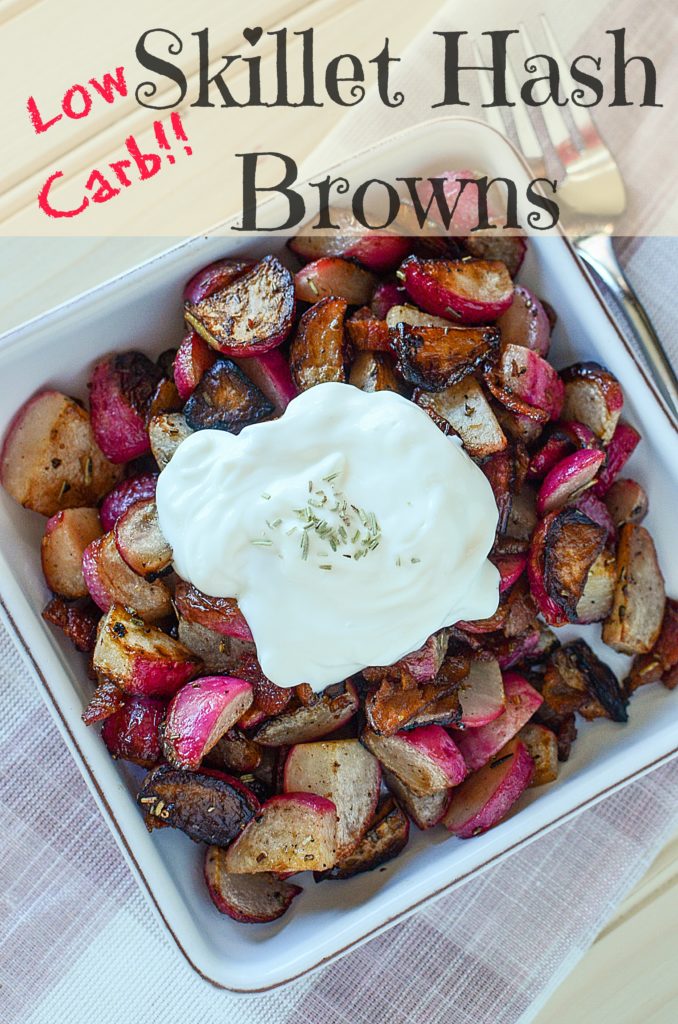 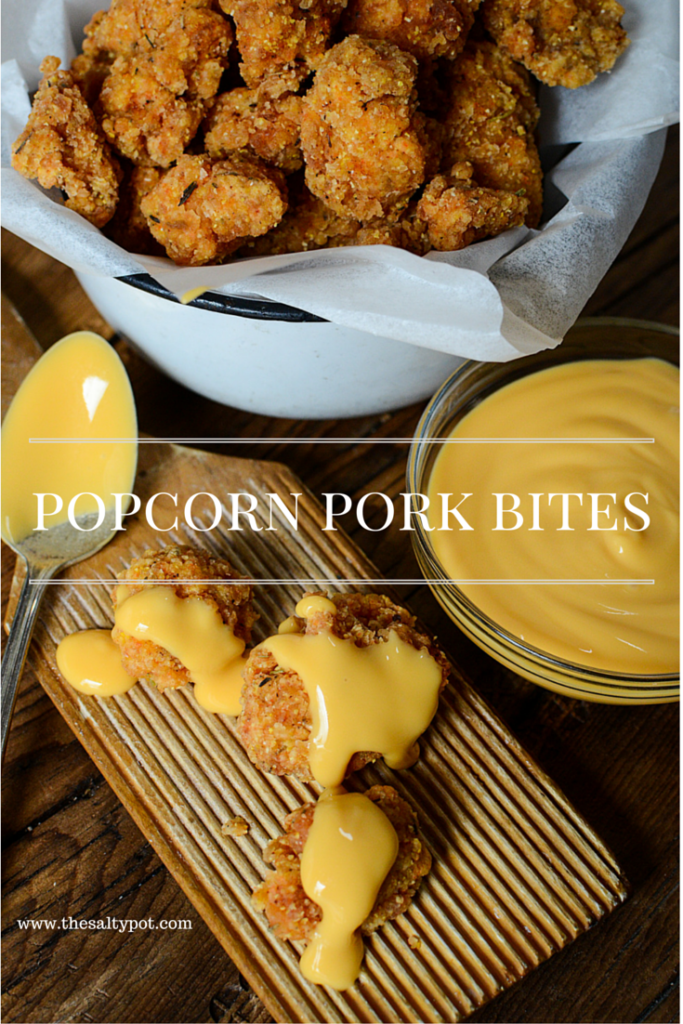 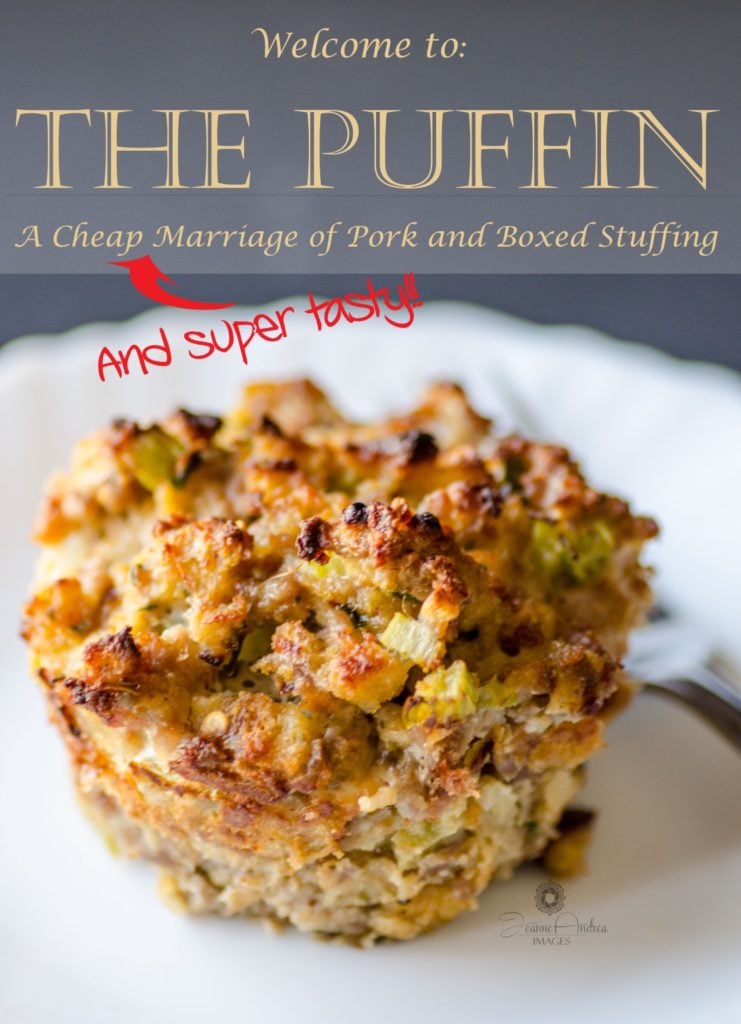 Pork and Stuffing Muffin ~ The Puffin

« my invention of the ravioli soup
Recipe Review: Grilled Fillet Steak with the Creamiest White Beans and Leeks »